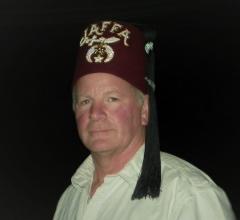 A group of twenty Nobles met February 20, 1922, at Jaffa Temple on Chestnut Avenue and organized the Oriental Band. The new unit subsequently performed at the Imperial Session in Washington D.C.

In 1924, a reorganization took place, and for the first time the Unit was recognized as the Jaffa Drum and Bugle Corps.

The present Jaffa Oriental Band was organized and chartered in the Association of Oriental Bands in 1953. The year 2003 celebrated its 50th year and is the sixth oldest marching unit.

One of the liveliest and most colorful units within the Temple, the unit is oriental in flavor and design, with funny snake charmers and even belly dancers, on occasion.

Kenneth V. Moore, charter member of the Oriental Band, was elected Potentate of the Jaffa Temple in 1987.

Arthur S. Calbert was elected president of the Mid-Atlantic Shrine Oriental Band Association in 1968-69, and George E. “Mackey” Garner served as president from 1996 to 1997.

Theodore H. Helsel Sr. was first vice President of the Mid-Atlantic Shrine Oriental Band Association for 2003 and was President in 2004.

Oriental Band members continue to serve the Jaffa Shrine in many ways: as roadrunners, ushers, circus committee members, sports show helpers, Potentate aides, and as staff members of the Jaffa Journal. Many band members have also been active in the Blue Lodge as officers and participate in numerous masonic activities.