**See below flyer for rules and regulations** 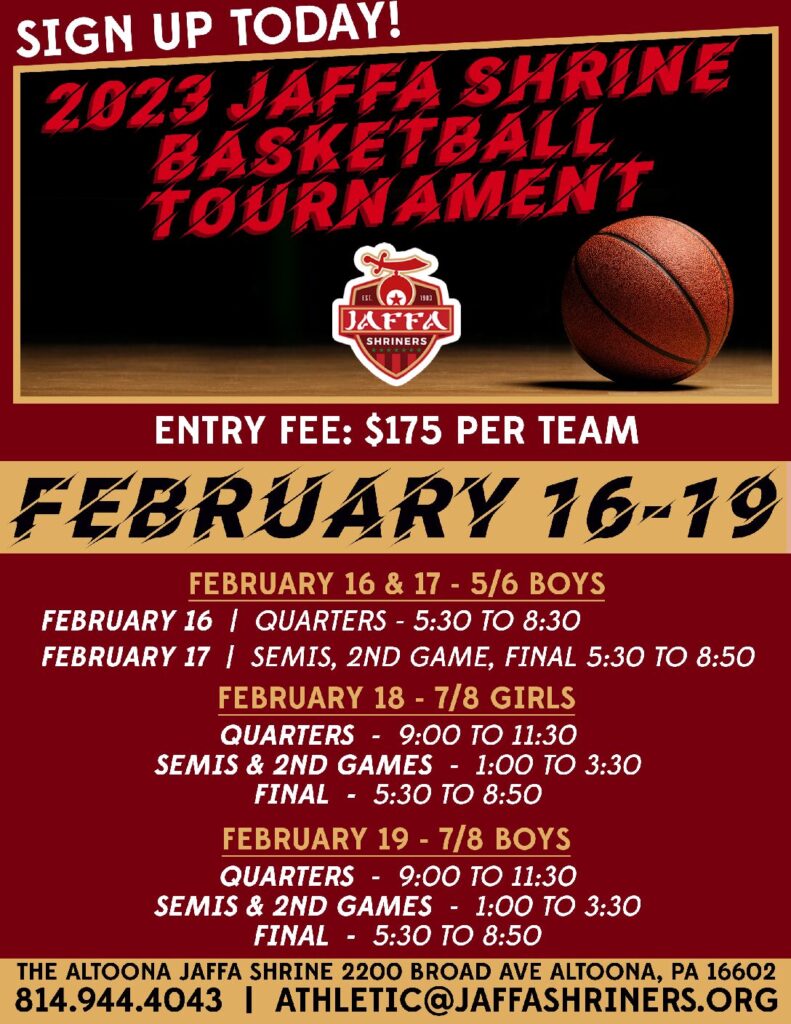 JAFFA SHRINE MARCH MADNESS BASKETBALL TOURNAMENT
GAME/PLAYING RULES:
1. Games will be 18 minute running halves. There will be stop time the last 2 minutes of each half. If the lead reaches 20
or more points, the clock will run through the last 2 minutes of the second half, even if the lead drops below 20 points. If
the clock is stopped during a free throw situation, it will restart when the ball becomes live; not when the ball is handed
to the shooter.
2. Teams can press full court at any time. However, No full court pressing by any team that is in the lead once the lead
reaches 20 points.
3. Three full time outs per game only. There is one additional time out in overtime. After a time out during a free throw
situation, the clock starts when the ball is back in play. This means someone in play must touch the ball after the free
throw situation ends for the clock to start.
4. Overtimes games will be a 2-minute overtime, with one minute of running clock and one minute of stop time. All fouls
carry over from the second half.
5. Pre-game and halftime are usually 3-5 minutes, but may be shortened at the discretion of the referees and
tournament officials in order to keep games on time. Come stretched and prepared to play by your scheduled time.
6. The Jaffa Shrine will prepare the official game scorer
7. There are no protests. All referee decisions are final. Any coach/player/parent/fan who berates a tournament official,
staff member, other coach, player, parent, referee, or fan will be ejected immediately from the tournament. Those who
do not leave immediately will be removed by authorities.
8. Disorderly conduct, damage to facilities, or violations of rules in the opinion of the tournament staff will cause you
and your team to be ejected from the tournament. You will immediately forfeit all subsequent games and all
fees/admissions paid.
9. Coaches must turn in final roster at the check-in table prior to your first game. At this time, your roster will be frozen.
10. Awards are given to 1st place team in each division.
11. Passes will be issued at the tournament upon check in for a maximum of the uniformed players on the roster, and 2
coaches per team, not for ball persons, managers, cheerleaders, etc…Anyone trying to bypass admission will be removed
by the authorities.
12. You may bring your own balls for warm-ups. The Jaffa Shrine will provide a game ball (Boys 29.5 and Girls 28.5)
13. No tournament flyers may be distributed for other tournaments, camps, Any individual, team, coach, or player
caught doing so will be ejected from the tournament.
14. Any forfeits will count as a game towards your two game minimum. Any team which forfeits a game will forfeit all
subsequent games and all fees/admissions paid and be removed from the tournament.
15. The Jaffa Shrine, the host site and all staff members are not responsible for injuries to players, coaches, spectators,
or guests. Injuries are the responsibility of the player’s own health insurance.
16. Players MUST be wearing their jerseys to be admitted to the tournament at all times. We have no other way of
distinguishing who is and is not a player.
17. Teams MUST bring their own medical supplies. This includes bandages, tape, etc….DO NOT ask us or the concession
stand to supply these! As a coach, please be responsible and bring a medical kit for your team’s protection

Thanks for your help and understanding of these issues!